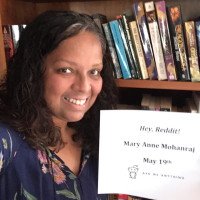 Mary Anne Mohanraj
Activism United States
Mary Anne Mohanraj is the author of Bodies in Motion (HarperCollins), The Stars Change (Circlet Press) and twelve other titles. Bodies in Motion was a finalist for the Asian American Book Awards, a USA Today Notable Book, and has been translated into six languages. Mohanraj founded the Hugo-nominated science fiction magazine, Strange Horizons, and founded Jaggery, a South Asian literary journal (jaggerylit.com). She received a Breaking Barriers Award from the Chicago Foundation for Women for her work in Asian American arts organizing, won an Illinois Arts Council Fellowship in Prose, and was Guest of Honor at WisCon. She serves as Director of two literary organizations, DesiLit (www.desilit.org) and The Speculative Literature Foundation (www.speclit.org). Mohanraj is Clinical Associate Professor of English at the University of Illinois at Chicago, and lives in a creaky old Victorian in Oak Park, just outside Chicago, with her partner, their two small children, and a sweet dog. Recent publications include stories for George R.R. Martin's Wild Cards series and stories at Clarkesworld, Asimov's, and Lightspeed. 2017-2018 titles include Survivor (a SF/F anthology), Perennial, and Invisible 3 (co-edited with Jim C. Hines). http://www.maryannemohanraj.com
Followers 7 Following 0
Connect
Mary Anne's Articles
This profile doesn't have any content yet.

So, when are you going to have kids?